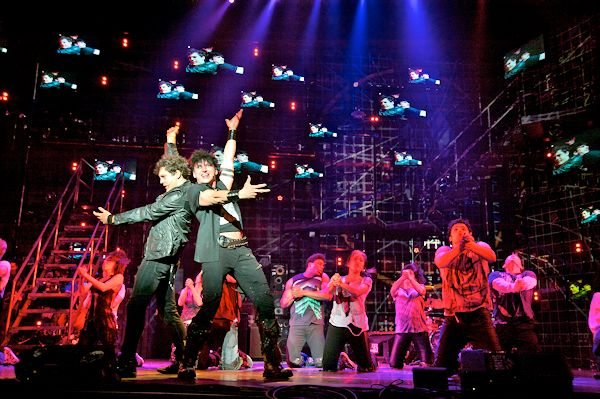 AMERICAN IDIOT premiered in Seattle last night at the Paramount Theater as part of STG presents Broadway in Seattle. The rainy weather didn’t dampen the mood of the theatre goers as we assembled in the historic theatre to wait for the curtain to go up.

The crowd was a comfortably dressed mix of punk kids with multi-colored hair and gray-haired senior citizens – I was definitely not the oldest person in the theatre. As the curtain rose it was obvious we were in for an emotionally packed show- it started out with a high energy rendition of Green Days’ anthem, “American Idiot” and that began 2 hours of intense emotion, passion, and tremendous talent.

The show is 90% music and 10% dialog with one song very often leading right into another. It moves smoothly and makes full use of the stage which is one large stationary set filled with televisions.  The TVs tell as much of the story as the music and they project the world surrounding the story as it’s taking place on the stage.

The three lead males, Van Hughes, Joshua Kobak, and Scott J.  Campbell, are all outstanding talents and their voices blended superbly. There isn’t a singer/actor/dancer that isn’t fully utilized in the show with all of them having incredible talents. The dancing is hard and rough in most areas and yet sweet and soft in others. 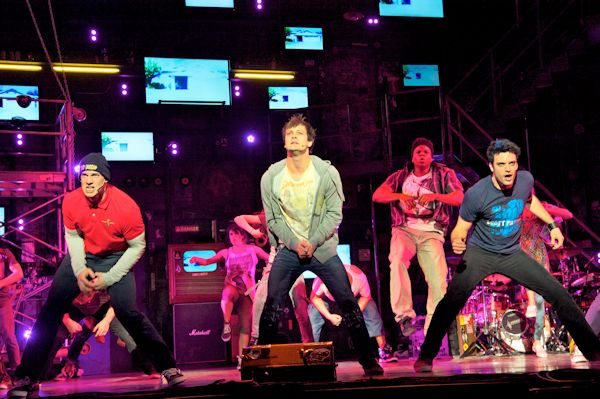 While the show is mostly the high energy you’d expect from a punk band, there are many soft, sweet, and touching moments. I was brought to tears during “Wake Me Up When September Ends,” as Hughes (Johnny), sits simply in the middle of the stage with his guitar. Yet at other times I could feel the rage of the cast as they portrayed their coming of age and the dissolution of their innocence.

The music is performed live by an exceptional band right on the stage and integrated wonderfully into the show. The show itself is raw and yet polished, grimy yet hopeful, and very real. The story doesn’t lag and you won’t need to read the program before the show to understand what’s happening on stage and yet it’s not too cliché.

Parents should know that there is simulated sex, drugs, and language involved in the show and quite a few scenes the cast is dressed in underwear.

The Story Behind American Idiot

Do you have to be a Green Day fan to enjoy the show? Judging from the crowd’s reaction on opening night the answer is no. The majority of the crowd didn’t appear to know the songs and yet they were very responsive to the talent on stage. The cast received two much-deserved standing ovations from the very appreciative crowd and the finale was very well received. The cast appeared to enjoy their time on stage and the start of their tour in Seattle.

Plan to attend one of the remaining shows. Tickets are available as are rush tickets and student tickets. This is a show you’ll enjoy and a night of fabulous entertainment.

Tickets start at $25 and are on sale online at stgpresents.org, tickets.com, and select Ticketmaster locations. You may also purchase tickets by calling 877-STG-4TIX (784-4849) or purchase them in person at The Paramount Theatre Box Office (Monday through Friday, 10am to 6pm).

AMERICAN IDIOT will be at Seattle’s Paramount Theatre for 8 performances – the remaining Seattle engagement schedule is as follows: 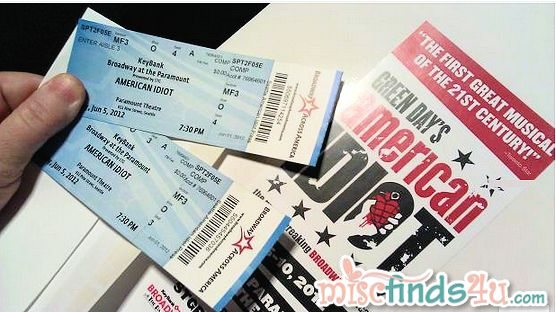 VIZIO is the official TV partner of the AMERICAN IDIOT tour.

About the Paramount Theater

Arrive early for the best chance at inexpensive parking. The lot across from the Paramount has always been expensive during events, but they’ve upped their price to $25 plus tax so parking was $30.  Park at the Convention Center and walk or choose an on street location but read the signs carefully – the Paramount is surrounded by tow-away zones.

The historic theater is stunningly beautiful and unlike most, the seats are amazingly comfortable.  Please note that this building does not have an elevator so if you have trouble using the stairs please ask for a seat on the orchestra level. Restrooms require the use of stairs as well, but there is a handicap restroom under the grand staircase on the first floor for those who need it.

fun. We Are Young My New Old Age Anthem

Sunshine in Seattle – Lunch, Shopping, and Little Ones