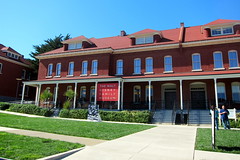 The Walt Disney Family Museum is an homage to the man who arguably built the greatest family-friendly entertainment business in history. While other Disney Company museums are archives of the business, the WDFM is decidedly focused on the man.

The building that houses the museum is stunning and the grounds magnificent.  The tour begins in Gallery 1 and tells the story of Walt’s birth in 1901 as the fourth of five children born to his parents Flora and Elias Disney.  The gallery is decorated and outfitted to demonstrate the look of the times. It’s media heavy, as are all of the galleries, but this one also includes a “family wall.” It’s filled with photos of everyday life.

As you take the self-guided tour you’re transported forward from the early 1900’s  and through the Hollywood years, the 1930’s which is where color was introduced, on into the 40’s where Snow White and the Dwarves became a reality.  All along the way you’re greeted with audio, video, and tactile stimulation to keep even the youngest museum visitor entertained.

Each gallery’s theme is carried out in décor, colors, and media and it’s fantastic to walk through the decades, the accomplishments, the failures, and I truly felt immersed in it all. Gallery 9, the 1950’s and 60’s – big screen and beyond – is visually the most stunning. It’s like walking into the middle of one of Walt’s Disneyland rides.  It’s just after enjoying the most amazing view of the Golden Gate Bridge I’ve ever enjoyed, so it adds to the shock to enter into something so majestic.  It’s here that Disney’s infamous backyard train set is on Display –one of the highlights for me personally.

But it’s Gallery 10 that took my breath away and brought me to tears.  It’s here that the day, December 15, 1966, is memorialized.  It’s the day Walt Disney died of lung cancer in a hospital just across the street from the studio he and his brother built.  But it wasn’t his passing that brought the tears; it was the drawings animator’s did upon hearing of Walt’s death – the much-loved Disney characters are drawn shedding tears for their father.

I want to personally thank the Disney family for sharing such a fabulous amount of personal history from their father.  What a wonderful legacy they’re leaving in their father’s name.

If you’re ever in San Francisco, stop. Enjoy. Learn, Live. You don’t have to be a Disney fan to enjoy the history, but if you are a Disney fan, it’s a must.

When You Visit the Walt Disney Family Museum

Photo Credits: Walt Disney Family Museum and used with permission
I was a guest of the WDFM but all opinions are my own.

Disney’s Grand Californian Hotel in the Heart of Disneyland

Seattle Ice Storm Photos Plus 24 Hours of Peace and Quiet

Snow Days Are My Favorite Kind of Days Here in Washington