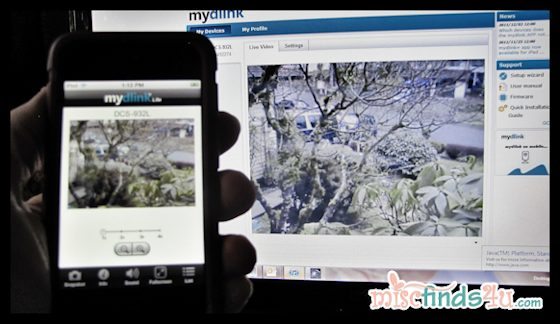 D-Link Day and Night Camera - an inexpensive way to check out what's going on at home or work from any internet connected device © MiscFinds4u.com

Have you ever wished you could check on the kids in the basement without running down to see what they’re up to?  Or do you dread that unexpected knock on the door – sure, it could be a friend offering cookies and a smile, but more likely it’s an annoying solicitor waiting to talk you into something you don’t need or want.  Or do you have an older parent who needs someone to keep an eye on them to know they’re not alone?  I’ve been in all of these situations and always wished there was an inexpensive way to see and hear what’s going on when I’m away.  Luckily for me, there is a solution I can afford available now.

The camera isn't obtrusive and is easy to place in any room ©MiscFinds4u.com

The  D-Link Day/Night Network Camera (DCS-932L)($149.99) is a small little camera that requires nothing more than access to your home’s Wi-Fi and a power outlet.  After a simple set up you’ll be able to access your camera’s feed from any internet connected device!  And no worries, your stream is safe and only available to you and your designee via a password protected secure login at the D-Link site.

The cool thing about the camera is that it is compact but it’s visible.  There’s no worry that someone won’t know they’re on camera – it has lights to let you know it’s active and when it switches to night mode, it projects green light.  It transmits both video and sound and while the sound is not spectacular, it’s enough to be able to tell what the kids are doing to each other or if mom has left something on the stove after she’s gone to bed.

This camera feed is live so as long as you have a fast enough internet service and a capable router you’ll have live video and audio.  Unfortunately, our old router wasn’t robust enough to live stream so the sound was inaudible and the picture jerky.  We upgraded to a new router, a D-Link because it was recommended by a techie friend, and the two work beautifully together and now I can access my camera feed from anywhere and instantly.

The night feature is where the D-Link Day/Night camera shines.  It produces some spectacular results when it switches over to the infrared mode – in fact, we used it under the house during the dead of night and to check out a back corner of the crawl space and the night vision worked beautifully.

We’ve used the camera in some strange ways – the crawlspace video was to see if we had mice after we thought we heard something in wall, so we set up the camera and a mousetrap baited with peanut butter, then sat upstairs and watched for some action.  THANKFULLY we didn’t see or catch any thing.   We also use the camera for our elderly dog who has cancer.  He needs to go out about 30 times a day and most times he just stands at the backdoor patiently waiting.  We use the camera to alert us he needs to go out.

Since the camera is so easy to move, it’s been just about everywhere and we’re actually going to purchase a second camera because we seem to flop it between two places most of the time.  Luckily the system is set up for multiple cameras so that’ll be an easy add when we do purchase the additional camera.

The smartphone app and web interface has some great features.  You can take a snapshot of the live video and save it, mute the sound, make the picture full screen, zoom, and check out your current transfer rate.  We don’t use these features often but we’re glad we know they’re there in case the need should arise.

Using the camera facing outside ©MiscFinds4u.com

The D-Link Day/Night Network Camera (DCS-932L) does exactly what it’s advertised to do and well, but I can’t help but have a little wishlist of options or features I’d like to see them add.  The web interface is a little clunky and it loads slower than the iPhone/iPod app so I generally go straight to the iPod Touch even when I have a notebook in my lap.  The picture is bigger on the notebook but the interface doesn’t allow you to resize it smaller and have it float above your other windows.  This would be a great feature for someone keeping an eye on kids in the backyard, or an elderly parent, or the front door waiting for the UPS delivery person.  Instead I have to rely on sound to alert me something is going on in the room or prop my iPod Touch in the crook of my notebook so I can actually watch the video as well.

If I could have another wish it would be that it had a motion detector and a tone to notifiy me something’s changed in the room.  Perhaps there’s a more expensive model that does that or maybe a hint at an upgrade for the next model! Even with the minor limitations and wishes, I’m a huge fan of the D-Link Day/Night Network Camera (DCS-932L) and highly recommend it if you need 1-way visual and audio surveillance – it’s perfect.

This is not a substitute for situations where hands on care is needed. For times when you just need to see what’s going on inside or outside your home or office, this is an easy and economical way to do it.

10 Kitchen Gadgets That Pay For Themselves!

Quality and Affordable Hotel Style Bedding for Your Home