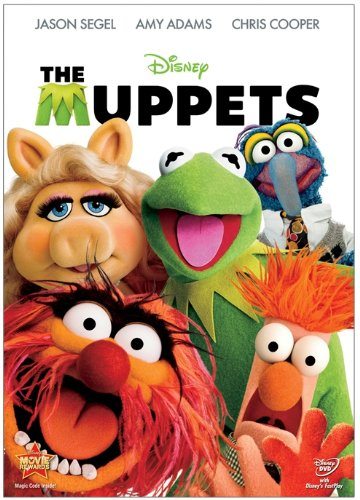 Hello again everyone, Alex here again. Today I am reviewing the Disney’s “The Muppets”.

In “The Muppets” a die hard Muppets fan, Walter (voiced by Peter Linz), along with his brother Gary (Jason Segel), and Gary’s girlfriend, Mary (Amy Adams) travel to Hollywood. What they thought would be just a sightseeing trip turns out to be much more when they meet Kermit the Frog (voiced by Steve Whitmire) and find out that the historic Muppet Studios is in danger from the evil oil baron Tex Richman (Chris Cooper). Kermit along with the help of his new friends must gather the rest of the Muppets cast and put on one last show to save their theater.

I remember growing up watching movies such as “The Muppets Take Manhattan” and “Muppets From Space” and even though I may be a bit too young to have enjoyed the Muppets television shows as anything other than re-runs, the television episodes and movies were some of my favorites. I think that this movie has captured perfectly the essence of the original Muppet adventures. With plenty of wit, physical humor, and a hefty helping of celebrity appearances, this movie is fun from start to finish.

As a life long Disney fan I have learned to love the over the top Disney cheesiness that comes from a musical such as 2007’s “Enchanted”. What director James Bobin has done here is take that cheesiness and turned it up even higher, just when you think it has gone over the top, the film pokes fun at itself and wins you over. On top of that, The Muppets is also a truly moving film with many moments of really impressive acting from both the humans and the muppets.

In conclusion, The Muppets was by far the best family film of 2011 and one of the best comedy movies that I have seen in years. The director James Bobin has breathed new life into the Muppets franchise that I hope continues into future films. I would recommend this film to anyone, it is the perfect family movie that will keep both the adults and the kids entertained throughout.

Purchase “The Muppets“ at Amazon.com

Review: THE WHISTLEBLOWER with Rachel Weisz and Vanessa Redgrave