Oprah Winfrey wants to do for documentaries what she did for books.  She wants people to see some of the best real-life stories out there and this film, MOST VALUABLE PLAYERS, is the first in the OWN Documentary Club series.  Now I’m a seasoned documentary viewer – I actually love them, so I expected the best and I wasn’t disappointed.

MOST VALUABLE PLAYERS is introduced first by Winfrey and then by Rosie O’Donnel.  Both share how the film touched them and it’s just a few minutes of introduction and then we’re right into the story about a small community where High School sports had been the focus. But a few schools bucked the trend and they made High School Musicals as popular as sports. The theatre season culminates with an award show named The Freddy’s, which is the High School equivalent of the Broadway Tony’s.  The show, named for a ghost said to live in the theatre, became an overnight sensation and a chance to support the kids in music and theatre.

The documentary follows three different local theater troupes as they work towards putting on an amazing show with the hopes of being awarded for their efforts with a Freddy.  The kids are talented, dedicated, and really engaging.  The reasons they’ve come to do musical theater is different for many.  Some because of physical limitations, others because they feel drawn, and a few others that were hoping for an easy grade.  And when two different schools plan the same show on the same weekend, the competition is on.

The story ends with the presentation of The Freddy’s and I admit, I found myself smiling throughout the show and I shed more than a few tears.  I suppose because of my history.  I played in the orchestra in high school for “The Sound of Music” and played a large role in a drama on stage in another show.  My own son left football to do musical theater in his sophomore year and it’s some of his fondest high school memories.  I know first hand how students and parents have to raise money to support the programs and the financial and time burden presented to families by participating.  But I loved every minute of those three years as well and the reward was watching the incredible talent of the kids, including my own.  This documentary reminded me that it’s time to get out to the local school theatres for some amazing performances and to support the arts in my community.

The documentary is now available on DVD.  It’s a great documentary about the positive things kids are doing in the community and I love and support that.

Purchase the film at Amazon.com 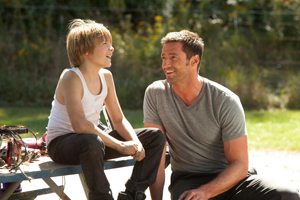