I am a Gleek.  I have been since the very first episode.  Sure, not every episode is amazing, but enough of them are that I’m hooked.  I love the music and the incredible collection of talent that makes up the cast.

I would have loved to have seen the Glee kids in concert, but their summer tour didn’t come anywhere near us. The next best option is the video version of that concert, Glee: The Concert Movie,  and it’s now available on DVD and Blu-ray!

Glee: The Concert Movie was released to home video on December 20th and it stars all of my favorite Glee characters including the Warblers and Gweneth Paltrow as the slightly misguided substitute teacher.  The concert allows each character to shine in his or her own spotlight song, but there are plenty of ensemble pieces to keep everyone happy as well.

The Blu-ray includes extended scenes and scenes that were not included in the theatrical release which means even if you saw it in the theaters, there’s new material to check out her.  This isn’t, however, a video of the concert – it’s done in a documentary style with fan videos and character vignettes between the songs.  It’s also just a sampling of songs from the concert.

The Glee: The Concert Movie DVD and Blu-ray also offer something completely new to me – Shazam!  While you’re watching the movie, prompts come up on the screen that let you know there’s a Shazamble moment. Using your smartphone with the Shazam application installed, users can unlock additional content including exclusive cast photos, Fox TV trivia, behind-the-scenes footage, and a really cool feature called LyricPlay that shows the songs lyrics in sync with the film so you can sing along.  There’s also information on Glee merchandise and a special offer for glee Seasons 1 and 2.

When you use the Shazam feature it tags the information on your phone so you can access the extras that you’ve unlocked any time you like directly from you phone and you can share use their Facebook Friends feature to let others know what you’ve discovered.  The app can be downloaded at the  iTunes App Store, Android Market, Amazon App Store, AT&T’s AppCenter, Verizon VCast app store, The Nokia Store, Windows Phone Marketplace, BlackBerry App World, and GetJar.

So I gotta as, are you a Gleek?

Lear more about the feature at www.shazam.com 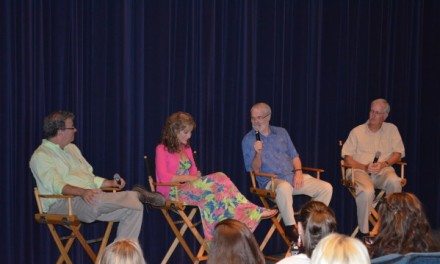