I’ve had to rethink the way I cook ever since we discovered my husband’s blood pressure was high.  Now he’s very physically fit, at goal weight and always has been, and he’s always been able to eat whatever he wants – until now.  Once you start looking at the sodium content in foods, especially processed foods, you realize that there’s a lot of it!  But, in the short time he’s been eating a low-salt diet, his blood pressure has gone back to normal levels.  That’s enough to convince him that he needs to make this a way of life and I’m thrilled, ’cause it means I’ll very likely have him around a lot longer.

Still, cooking has taking on new dimensions.  We already deal with the organic/vegetarian vs the meat-eater issue, and now we’ve added in the whole no-salt issue.  So I’ve been revamping recipes, trying new ones, and looking for alternative products.  One that I’ve just found out about, and will be searching out at my grocery store, is the Clabber Girl’s Rumford Reduced-Sodium Baking Powder.  I already use their aluminum- free version (Monocalcium Phosphate, Bicarbonate of Soda, Cornstarch from Nongenetically Modified Corn) and now I’ll check out this one as well.  It’s brand new and said to have as much as 52% less sodium than other leading brands.  I finally found the exact amount – 1 tsp = 280mg compared to the version I use which is 440mg for the same 1tsp.

“By simply switching to reduced-sodium baking powder, you can eat healthier, even if you’re indulging in some of your holiday favorites,” said Lori Danielson, a spokesperson for Clabber Girl.

I’m going to be picking some up some time soon as it’s now available at grocery stores and WalMart and I’ll let you know how it works.  Until then, here’s a recipe from Clabber Girl which makes use of their new formula (recipe & photo used with permission).  I’ll be trying this with cranberries – it’s the only kind of dried fruit cake that would be a hit in our house.

Save Print
Cranberry Spice Cake
This cake is made with reduced-sodium baking powder and can be made with any of the fruits listed below. 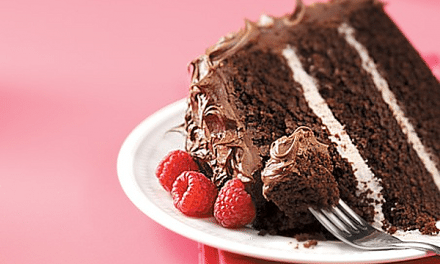