Disney is releasing their blockbuster, PIRATES OF THE CARIBBEAN: ON STRANGER TIDES on Blu-ray 3D & Blu-ray Hi-Def on Tuesday (10/18/11).  To celebrate, we’re giving away the most amazing Pirates Prize Pack!    One lucky reader will win an awesome replica of the Queen Anne’s Revenge from LEGO’s Pirates of the Caribbean Collection valued at $119.99!  How fabulous would this little beauty look under the Christmas tree! PLUS you’ll receive your own PIRATES OF THE CARIBBEAN: ON STRANGER TIDES Blu-ray Hi-Def Combo Pack.  How cool is that!

This amazing LEGO set is for ages 9-16 and includes 1097 pieces and mini figures.  Wanna see how cool it is?  Check out this LEGO Queen Anne’s Revenge YouTube video and yes, that’s an adult man dressed as a pirate demonstrating it and yes he talks about how cool it is for over 16 minutes. 🙂

Haven’t seen the newest movie in the Pirate’s franchise?  Here are a few details:

Angelica (PENÉLOPE CRUZ) and Blackbeard (IAN McSHANE) in search of the fabled Fountain of Youth in the jungles of a tropical island, along with zombie officers Quartermaster (IAN MERCER) and Gunner (DeOBIA OPEREI), and captive missionary Philip Swift (SAM CLAFLIN).

Produced by Jerry Bruckheimer, directed by Rob Marshall (Nine, Chicago), and written by Ted Elliott and Terry Rossio (Pirates of the Caribbean franchise, National Treasure 2, Mask of Zorro), Pirates of the Caribbean: On Stranger Tides has entertained audiences of all ages with its thrilling adventures, hi-tech special effects and unique storylines.

Shot in high-definition 3D, the visually stunning film invites viewers to embark on an adventure-filled ride with Captain Jack Sparrow as he searches for the breathtaking Fountain of Youth. Along the turbulent trip, fans are forced to re-think their knowledge of fairytale creatures when they are introduced to a group of alluring yet precarious mermaids, traverse isolated islands, and fight international enemies.

Please wait for the Rafflecopter widget 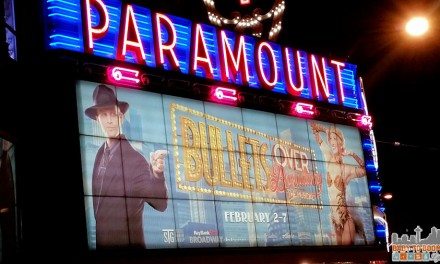 Broadway at The Paramount presents: BULLETS OVER BROADWAY

The Venice Experiment: A Year of Trial and Error Living Abroad