Miss Piggy has been MIA for the last few years, but she’s not been sitting back on her bacon….she’s been working to bring it home.  This larger-than-life star of film, TV, stage, online, and all known media channels is making her long-awaited and much-sought-after return to the big screen where she belongs in Disney “The Muppets.”  This will be the culmination of a career that started with her first public appearance in the chorus on the “The Herb Alpert Special” in 1974.

Lest you missed that stunning performance, perhaps you caught her stunning turn as the 1st Sow in the “Return to the Planet of the Pigs.” This illustrious piece of perfection was broadcast as part of  “The Muppet Show: Sex and Violence” in 1975.  So stunning was her performance that this became the precursor to the show that made her a household name, “The Muppet Show.”  Who can forget her break-out performance during the musical number “Temptation” on very first episodes of “The Muppet Show.”

Miss Piggy may have had a humble start as a chorus pig but she left the game as a star… who wouldn’t let go of Kermit. The rest is history. 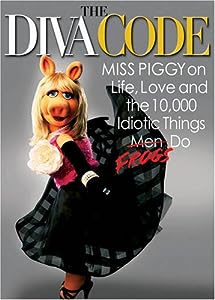 Piggy’s book “Miss Piggy’s Guide to Life” was a national bestseller. And she recently followed up this success with her wildly popular book “The Diva Code: Miss Piggy on Life, Love, and the 10,000 Idiotic Things Men Frogs Do.”

A CONVERSATION WITH MISS PIGGY

What is Disney’s “The Muppets” about?

It’s moi’s story, of course. It’s about how I am working in Paris and Kermit and the other Muppets come over and beg me to come home. I run the complete gamut of acting—from smiling to frowning. It’s got Oscar® written all over it—and I’m not just talking de La Renta. I have heard rumors that there’s another storyline in the movie that doesn’t involve moi, but who really cares about that?

What is your role in Disney’s “The Muppets?”

Moi plays moi.  It’s a casting no-brainer. Naturally, all of Hollywood’s top actresses tested for the part—Roberts, Streep, Winslet, Jolie, Bullock—but in the end they decided that there is only one moi and I’m it!

In the movie, I portray the plus-size fashion editor of Vogue Paris—I’m in charge of a whole office full of editors who all want to look just like moi. But of course, Kermit wants me back with the Muppets to save the day and put on some big show.  Can I resist? Well, see the movie and find out.

How does your life differ from the characters you portray on the big screen?

In real life, my wardrobe is much, much bigger and more expensive, but I’m a lot like what you see on the big screen. The camera does add a few pounds—when people meet me in person they’re always amazed at how svelte I am. Take my word for it.

What made you agree to star in Disney’s “The Muppets”?

It was written especially for moi. And they said I could keep all the shoes.

What is the funniest scene in the film?

The scene where Kermie begs me to come back to Hollywood with him is the most comic scene. I’m hilarious; the frog isn’t half bad either. There are so many very funny scenes in the film… and guess what, Moi is in all of them!  Coincidence? I don’t think so

Jason is a sweet, sweet man… and a very funny comedic actor. Of course, when I heard he wrote the movie and could write my part even bigger, we became best friends forever.

Amy and moi are so much alike, except for the fact that she’s been nominated for an Academy Award® THREE TIMES and I’ve gotten bupkis!   (Entres nous, I think they just don’t want to nominate anyone outside their species.)

There was a little tension, at first, but once Amy learned about not touching the frog, we became fast friends.  We hang together whenever we’re in the same city, which up to now has been… let’s see… never.

What can I say about Kermie and moi? Separately we’re fabulous and together we are absolute legends—like Astaire & Rogers, Tracy & Hepburn, Oprah & Stedman.

Walter is delightful! He worships the Muppets and especially moi. And as everyone knows, I absolutely adore being worshipped.

You are a fashion icon. What is your secret?

I have a few fashion secrets:

What do you do in your free time?

Shop. Eat Chocolate. Pose for photographers. Rinse. Repeat. I’m a diva. I have people to schedule my free time. You have no idea how time consuming that is.

Are Piggy and Kermit still together? – photo credit © Disney

Are you and Kermit together?

Of course we’re together.  In the movie, we seem to be apart, but that’s just for dramatic tension. In real life, we’re fabulously happy and the longest-running interspecies couple in all of Hollywood.

Why should audiences see Disney’s “The Muppets”?

Because moi is in it!  What a silly question!

Wan more of the diva pig?   Check out her fun videos at http://disney.go.com/muppets/portfolio/piggy/videos.html.

On vacation in Los Angeles, Walter, the world’s biggest Muppet fan, his brother Gary (Jason Segel) and Gary’s girlfriend Mary (Amy Adams) from Smalltown, USA, discover the nefarious plan of oilman Tex Richman (Chris Cooper) to raze the Muppet Theater and drill for the oil recently discovered beneath the Muppets’ former stomping grounds. To stage a telethon and raise the $10 million needed to save the theater, Walter, Mary and Gary help Kermit reunite the Muppets, who have all gone their separate ways: Fozzie now performs with a Reno casino tribute band called the Moopets, Miss Piggy is a plus-size fashion editor at Vogue Paris, Animal is in a Santa Barbara clinic for anger management, and Gonzo is a high-powered plumbing magnate. With secret, signature, celebrity cameos, Disney’s “The Muppets” hits the big screen Nov. 23, 2011.

Audiobook Review – Cinder: Book One of the Lunar Chronicles – An Unusual Fairy Tale

Gearing Up for Disney’s “Muppets Movie” and DreamWorks’ “Real Steel”