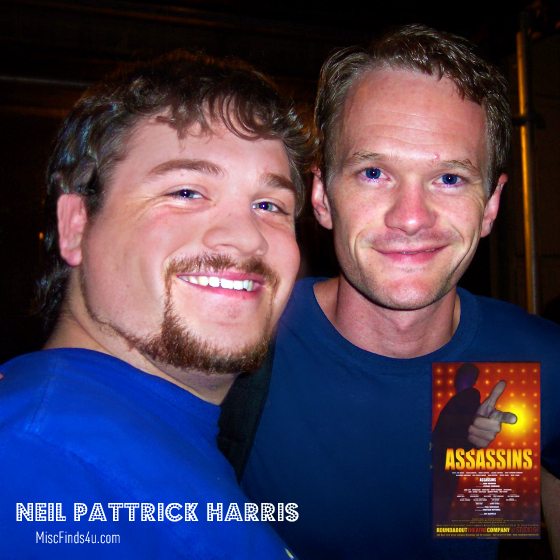 My son quit football in his Sophomore year of High School to do theater.   It’s a passion and he’s very, very good at it.  To celebrate his High School graduation in 2004, we took a trip to NYC and stayed in the heart of Broadway.  We saw so many shows that week, but one of the highlights was “Assassins“.  We had no idea what the show was about and really not much history with its star Neil Patrick Harris (I’ve never seen an episodes of “Doogie Houser“).  The theater was one of the old historic theaters with crazy steep stairs and tiny seats….but so amazing!

The show started and I was literally on the edge of my seat and in awe.  Neil Patrick Harris was captivating from the first moment he stepped onto the stage and the show was fabulous.  We both loved it  and were so glad we’d picked it from all the shows available at Ticket…our favorite place to purchase tickets for shows the same day when we’re in NYC.

We waited at the stage door afterwards with our PlayBill and not only did Neil Patrick Harris sign it, he posed for this picture with my son.  He was a class act – kind, considerate, and charming.  I’m now a HUGE fan and love that I got to meet him in person and have my 15-minutes with him.

Thanks Neil Patrick Harris for making my son’s graduation trip even more memorable.

Assassins is a musical with music and lyrics by Stephen Sondheim and book by John Weidman, based on an idea by Charles Gilbert, Jr. It uses the premise of a murderous carnival game to produce a revue-style portrayal of men and women who attempted (successfully or otherwise) to assassinate Presidents of the United States. The music varies to reflect the popular music of the eras depicted.  The musical first opened Off-Broadway in 1990, and the 2004 Broadway production won five Tony Awards. – SOURCE Wikipedia

Travel Alaska: 5 Things Not to Miss When Visiting in Summer

Disneyland World of Color During Construction

Photo of the Day: My Alaska Cruise aka Barfing at Sea

Photo of the Day: First Time at Yellowstone National Park