While the other cities in the “Cars 2” movies are real, in Italy the production team decided to go with a fictional town.  Porto Corsa is a seaside city based on scenic drives the product team took Portofino, Italy and Nice, France.

“When we decided that we were going to create a fictional Italian town,” says Brad Lewis (Co-Director, Original Story By), “we wanted it to be our love letter to Italian racing. Racing in Italy is such a passion. We wanted to capture the heart and soul of it, from the beautiful coastline to the crazy crown jewel of racing — the Formula 1 race in Monaco — and, of course, Monte Carlo, which has the great casino.”

“The Italian Riviera is all terracotta roofs, brightly painted buildings and beautiful cobblestone with Mediterranean vegetation and beautiful turquoise water,” says Harley Jessup (Production Designer). While Portofino provided a lot of inspiration for Porto Corsa, the team wanted a very upscale look and feel for their fictional town, so they incorporated French-Riviera-style architecture into the Portofino-type setting and then the car-ified it features of classic Italian cars.

The car-ification including shaping the Porto Corsa Marina like an automobile wheel, building the casino a rocky outcropping shaped like a 1948 Fiat 500 Topolino, and adding fuzzy dice to craps table in the casino — like the kind of dice one would find dangling from a rear view mirror.

“The car-ification of these exotic locales is like a character unto itself,” says John Lasseter (Director). “It adds a level of humor and entertainment to the movie that the settings of a Pixar film have never done before.” 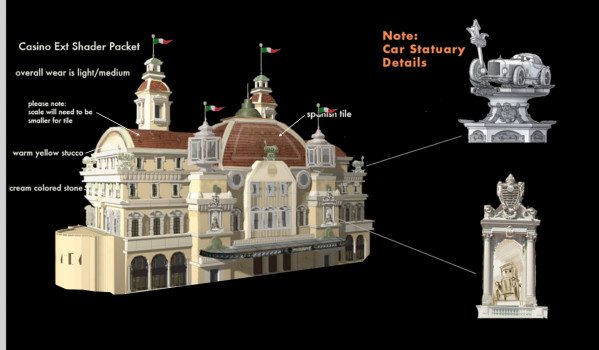 “CARS 2” THAT’S AMORE – Pixar reimagines the signature casinos of the European Riviera in Disney.Pixar’s “Cars 2” with the fictional Porto Corsa Casino in Italy. Concept art created in July 2010 showcases the “carified” elements – instead of lion statues on the building corners, Pixar artists created car statuary details. This concept art was created to help design the look of the film before the set was built in the computer. With all-new characters, comedy, heart and an action-packed tale of international espionage with Mater at its core, Disney .Pixar’s “Cars 2” hits the track on June 24, 2011 (U.S.), and will be presented in Disney Digital 3Dª and IMAX¨ 3D in select theaters. ©Disney/Pixar. All Rights Reserved.

Porto Corsa is the hometown of Luigi, the Italian race car.  It’s here that he introduces his mama as well as his charming village to the gang from Radiator Springs.  They also spend time with Luigi’s favorite uncle, Uncle Topolino, and his beloved wife, Mama Topolino. It’s Uncle Topolino, the owner of the village’s tire shop, who taught Luigi everything he knows – more than just tires, he also shared his sage advice as well.

Italy is a fabulous stop on the tour and it’s not long before craziness ensues!