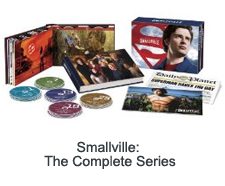 It’s hard to believe it’s been ten years since Smallville hit the small screen.  In those years we’ve watched Superman grow up and we’ve watched him be challenged by both good and evil.  He’s fought many a nemesis and lived through rivalries.  The most memorable for me was his relationship with Lex Luthor, undoubtedly the most well-known evil villain of the series.

It’s in “Zod” Seson 6, episode 1 that the writers of Smallville really delve deeply into Lex’s history and what made him so evil.  He was the second billionaire CEO of LuthorCorp and he struggled with self-destruction.  In this pivotal episode, his body was taken over by General Zod, a Kryptonian military leader, and as Lex he kidnaps Lana Lang.  Clark Kent must battle for Lana and when Lex/Zod has the upper hand, they force him to choose between joining them or being responsible for the loss of human lives.  Surely, good will win over evil, right?

The comic book genius this series plays out is perfect for any lover of campy, unique, and intriguing stories.  Watch for Lex Luthor (Michael Rosenbaum) to return for the finale and other mysteries will be solved as the series comes to an end.

If you haven’t had a chance to catch Smallville, you can check local listings for the final airings, or you can purchase the entire 10 seasons on DVD via Amazon pre-order.  You’ll be able to relive the epic battles and the iconic rivalries with the ‘Smallville: The Complete Series’ on DVD!  This special set includes 62 discs and includes never before seen production art and behind the scenes photos from the set!

Disclosure:  I have been hired by Warner Bros WBWord division to raise awareness for the Smallville DVD release