I’m one of the people who used to say that Crocs™ were meant for kids.  I thought they were plastic shoes that were just plain ugly.  Besides, who wants to wear shoes that make your feet sweat?

Well, about 6 months ago I relented and purchased a pair of “nurse” Crocs™ to do my Once a Month Cooking in.  Spending 8 hours or so on my feet on a laminate floor was making my back and feet ache.  I researched different options and decided on the shoes. At just over $40 they were much cheaper than a Gel-pro anti-kitchen fatigue mat, and unlike a mat, I didn’t have to plan my movements to keep me on it.  With the shoes I could go anywhere comfortably.  So I ordered a pair of pink ones and anxiously awaited them.

When they arrived, I was stunned by how light they were.  Literally just a few ounces.  And they were comfortable – like waking on marshmallows without the stickiness.  Yes, they were kinda ugly and clunky, but since I only wore them around the house and in the yard, I didn’t think much of it.  I’m no style maven and certainly not a style snob.  At nearly 50, I learned long ago to go for comfort, not looks.  Still, it’s not easy to match a pair of bubble gum pink shoes to anything in my wardrobe, so they remained my home shoes.

I do have a problem with the brown shoes, the snap will not stay in place, so I put them on with the strap to the back instead of over the foot.  It’s the only way I could keep the strap attached.  I’ll have to figure out how to get that one shoe fixed.

I read online that I can take it to a Croc’s Mall Kiosk for a replacement. Since I go to the mall about once every six months, it may be awhile before I get to wear them. But I have to say, they’re more comfortable than my $80 Clarks of England sandals!  I’m not ready to convert totally, but it’s nice having a choice. 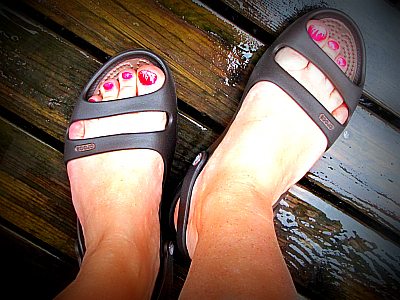 Here’s how the Cleo II’s are supposed to be worn.

Special thanks to Crocs™ and their representative Colleen,  for not one but two pairs of shoes – what a nice surprise!  And for letting me test drive their shoes for 50 and over club.  Now I dare someone to say something about Crocs™ not being for adults – they’re fabulous!  Now I’m totally sold on this reasonably priced and very attractive shoes!