Abercrombie Thinks There’s a Market For Padded Push-up Bikini Tops for Young Girls – Are They Right?

I’m not sure which is more troubling, that Abercrombie is selling push-up and padded bikini tops for girls as young as age seven, or that they think there’s a market for them.  No company puts out a product they don’t believe will be successful.  Usually there’s tons of market research behind every design.  I have to ask, where did Abercrombie get the idea that parents would buy these?

“Ashley” bikini — described as “padded” and a “push-up” — was posted on the Abercrombie Kids website earlier this week. The company declined to comment Saturday but noted it has since updated the description of its bikini online. The product is now being offered as a padded, “striped triangle.” Bottoms are sold separately. – CNN.com

I think our kids are being over sexualized at a younger and younger age.  While one could argue that the ultra-mini dresses (with matching panties underneath because they were so short) and halter tops I wore in the 70’s were no different, but I beg to differ.  We wore those in Junior High and as a parent I’m horrified that we were allowed to wear them even then.  But these push-up and padded bikini tops are made for children!  What pre-pubescent girl should be worrying about her breast size?

Gathering and lace on a push-up and padded bikini top for girls - wrong?

Now if they sold a flat padded bikini top for modesty, I wouldn’t complain, and by padded I mean lined.  But to add gathering at the bottom of the breasts to accentuate the curve and lace at the top, how can that be viewed innocently? Am I being overly protective or even prudish? I don’t think so.  But I can tell you if I had a daughter she’d not be wearing anything even resembling this until after her 13th birthday.  I guess that’s why I had boys.

So is Abercrombie right? Will we be seeing 7- and 8-year olds on the beach this summer with breasts?  I certainly hope not.  But I’d love to hear from someone who thinks this is a positive step in our human evolution.  I’m curious.

Note: I purposely did not link to the “triangle tops” because I choose not to support the sale of them. 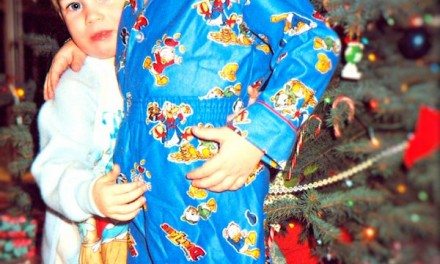 Living a Grateful Life: It’s the Thought That Counts and Meaning It

Summer Anxiety: How Your Family Can Beat The Stress