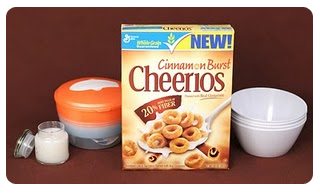 Cheerios come in a new flavor!  Cinnamon Burst which has 20% Daily Value of fiber.  These are tasty little Cheerios that have real cinnamon instead of cinnamon flavor and the flavor held up well in milk.  As an occasional treat, these would be a great addition to breakfast.  Regular or whole grain Cheerios have less sugar and are probably a better choice for most meals.  Mixing Cheerios Cinnamon Burst Cereal with regular Cheerios would also be a great way to keep the total sugar down, espeically for children.

Until BHT is removed, I will only eat these on rare occasions. Additionally, the “natural flavor” and “color added” are not identified so it’s likely something I’d rather not ingest.  Such a shame and I hope Cheerios works to remove or change some of these ingredients – they’ve been improving their ingredients a lot in the last few years so kudos to them!

Check out these delicious recipes made with Cinnamon Burst Cheerios® cereal!

Comment Contest – WinnersPrize won: Cinnamon Burst Prize Package GiveawayComment: virgomomwriter says My husband makes me smile in the morning when he says “love you” while rushing out the door…

Disclosure: Cheerios provided me with the free product, information, and gift pack through MyBlogSpark

Up Your Fiber Intake with Fiber One Cereal and Bars