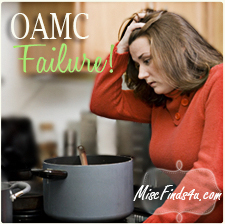 Most of my bulk cooking sessions end great, my full freezer can attest to this. Unfortunately, during my last two episodes I was distracted.  First by Netflix, then my husband, and lastly the sudden heatwave.

I tried Netflix years ago and hated it. My son is home from college for the summer and he convinced me to watch “Dexter” streamed via Netflix on his Wii.  It took only an episode to get me sucked in and next thing ya know I had Dexter streaming on my computer in the kitchen.

I blame Netflix for the first disaster. I ruined 12 cups of rice which should have been enough for 4 dinners.  Somehow while trying to catch an important scene on “Dexter”, I lost count on how many cups of water I’d added to the rice cooker. At least that’s my guess, because the rice was so gummy and uneatable that it had to be tossed.

The second goof up is half Netflix and half the hubby’s fault. I’d  moved back into the living room to see Dexter on the bigger screen (pivotal episode) and when the timer went off in the kitchen, I asked the hubby to test the potatoes I was boiling.  He yelled out to me that they were done so I asked him to drain them while I continued to be immersed in the TV.  Nearly an hour later I went out to the kitchen to continue cooking and found that the hubby had left the potatoes in the hot water.  Have you ever seen what happens to potatoes that in essence have cooked for 2 hours?  Yep, they go beyond mashed into disintegrated.  Had I peeled them I would have had potato water.  Since the peels were on there was a bit of substance.

I asked the hubby what was up with the potatoes and he said he couldn’t find the strainer.  Nice.  I told him to toss the potatoes and went back to business.  Imagine my surprise the next morning when I found two small bowls of potatoes in the refrigerator marked by the hubby, “Perfectly Fine Potatoes”.  Yep, I giggled . Now mind you, that was a five pound bag of potatoes boiled down to about 3 cups. 🙂

The next day I screwed up again, this time it was “Paul Blarth, Mall Cop”‘s fault and the heat. I don’t tolerate heat well because of my MS and we haven’t had a nice day in ages.  Why I decided to cook is beyond me.  I’ve made stuffed sandwiches for my son, his favorite, roast beef and cheddar.  I’ve made them many times, but this time I forgot to score the bread before I put it in the oven so it sort of exploded.  All of the cheese erupted all over the place – thank goodness for silicone pads!  Oh, and if that wasn’t enough, I cooked them 50 degrees lower than I should have because I was reading the recipe for the roast I was going to put in afterward.  The rolls ended up sans cheese, barely cooked, and weirdly hard.  Since there was 2 lbs of cheese (cheddar & processed, disgusting) and a pound of roast beef screwed up.

Anyway, my point is, to be successful at bulk cooking, planning is important but so is staying on task and being present. The worst part?  The cost involved in all of my mistakes. I’m going to have to forgo my new Netflix addiction while cooking and not count on someone else to strain the potatoes :).  But I do love Netflix now and may have to subscribe when the kid leaves. 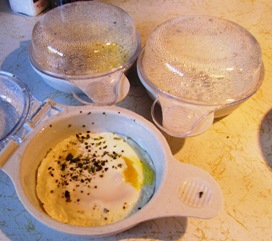 Review: Gluten-Free Bagels and Muffins Good for the Gut but Tasty?